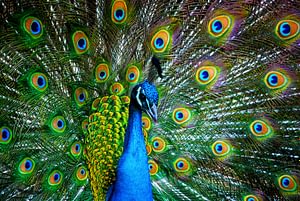 Vanity is generally not considered a noble personal quality. When patients come to me seeking cosmetic improvement, sometimes they feel conflicted because they feel they should not be vain. They may say, I don’t want to be vain, but I am tired of being told I look tired after a good nights sleep. Or, I dont want to be vain, but in my business, it is not good to look too old or tired. I am afraid I may be replaced by someone younger.

But the truth is, there are three important reasons that the wish to look better is not mere vanity, but has deep roots in our biology.

Good looks in the animal world can demonstrate what biologists call behavioral fitness, the ability to succeed in their world. Good looks are a distinct mating and breeding advantage. Animals seek mates that are, to them, good-looking. (Think of the male peacocks tail.) An intact, symmetric animal is one who has defended him or herself, and has not lost a limb or part to a predator or competitor. He or she can defend him or herself, and the nest, and the offspring. A good companion indeed! And a large, well-fed mate knows how to find and get food. Another good sign for a mate.

Appearance can also sometimes reveal genetic abnormalities, which in the animal world would not represent a good partner for the good of the species. In medical school, we all spend time in the pediatric service, and early on we learn that at birth a funny looking kid (that is the term that is actually used)? may need to be tested for genetic abnormalities. A funny looking animal has a good chance of harboring a genetic abnormality. And in the animal world that would probably not be the best mate for the health and success of the offspring.? In the wild, an odd-looking or ill newborn animal may even be shunned or attacked by other members of the species. This has been observed in bears and dogs.

So attractiveness is a biologic marker for both behavioral and genetic fitness, which profoundly effects the ability to succeed as an animal. I think it is clear that these instincts still exist deep in our DNA, and are reflected in our attraction for good-looking mates.

Third, an aging face sometimes fails to communicate our true vitality and energy. This argument that the desire to look better is not just vanity resides in the biologic function of our faces. We have almost thirty muscles in our face that allow us to make thousands of subtle expressions. There are even people who are professionals in using their faces as instruments of expression to great advantage: actors! And we also have circuits built into our brains that allow us to read all of these strong or subtle, happy or sad, charming or angry or quizzical expressions. So our faces have really evolved as organs of communication, just like our lungs have evolved to breathe air and our hearts to pump blood. If droopy, baggy eyelids make me look tired or sad when I am neither, that is a failure of the biologic function of my face, just like heart failing to pump or lungs failing to bring in oxygen.? My face has failed to correctly communicate my inner self, which is in fact an important biologic failure.

So a beautiful and healthy face is not just skin deep, but our attraction for it lives deep in our biology and evolution.